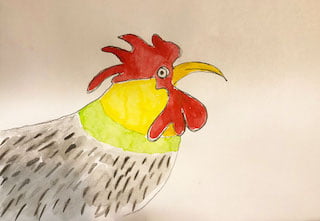 The other day I wrote a post about how effective written notes were.

I heard from so many people who told me they save them for the days that aren’t so good. They are THAT effective.

But a question arose – is the reason we have to save them because we get them so infrequently?

I don’t exactly know where I got the following idea but probably on Pinterest. There is the note which we know is a terrific thing to send and receive. And there is the envelope which I usually address and at the most, sometimes draw a ladybug or butterfly.

That is…until I saw the section on Painted Envelopes.

Holy Cow! This ups the ante on effectiveness – plus it’s fun.

It doesn’t have to be a masterpiece but it adds something fun, caring and let’s the receiver know they are getting something special.

Here are two more I just completed. I had fun with them – it might have taken me a half hour in total.

I sent the elephant one to a friend and I got a wow note from her in return!

If you want more ideas, take a look at Painted envelopes or Mailart on Pinterest.