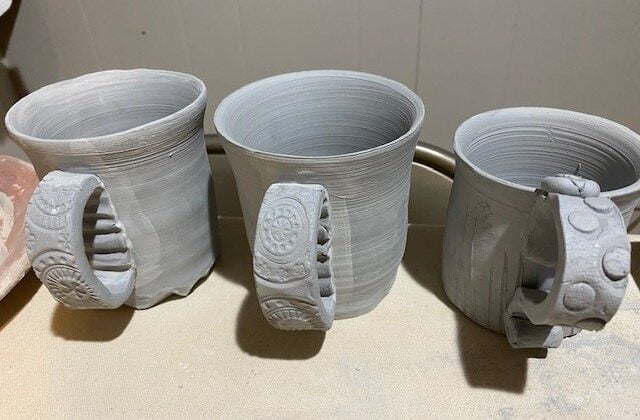 Karen Izzi is an artistic whirlwind. She kindles the energy of kindness and spreads her love before any path she chooses to follow. She is electric with ideas and love expressing them in her art.

An art therapist at Camphill, she was furloughed in March and was without income when she decided to start making a few mugs for friends. She immediately started getting orders. Her use of color and design improves the taste of coffee every time.

She needed more clay and somehow a number on the order got transposed when it was submitted. When she fired the new batch of mugs with her new clay, she opened her kiln only to find that it had turned the entire inside to glass and wrecked it.

She called the kiln doctors who told her it would be around $1300 to rebuild it using some of the elements in a new kiln.

In a tailspin , she posted the story of her predicament.

A newish friend saw her post and called to tell her that she had a friend who had some experience with Kickstarter and GoFundMe sites. She asked her if she would be okay with her asking her friend for help.

Karen agreed and the call was made. The friend who made the introduction was tied up with major projects and left the project in her friend’s hands. The friend, Miriam Hughes is also an artist and somewhat of a Pied Piper of people and dogs.

Always willing to help others, she called Karen and in short order together they hammered out the project descriptions and information needed for Go Fund Me. They posted the project on social media and asked their friends to share it.

Karen had $1300 in two days. It came in small and large donations from people who knew her, from other artists who knew the pain of disaster firsthand, and even strangers who were inspired by her story.

And, of course, it is the story of how encouragement reminds us that we are here to help each other.

Fear stops us making us think that if we express our worry, we will be judged for our mistakes, that others will think the most terrible things possible. We go down that rabbit hole forgetting that generosity is a gift in itself.

The story didn’t end there.

A few weeks after Karen got her repaired kiln back, she received an email from an artist offering her a kiln for free. She accepted the gift and then realized it was a kiln specifically designed for glass. She couldn’t use it.

She put it out on the curb hoping someone who could use it would recognize it and be able to use it. Many stopped, then moved on.

Later that day a young man pulled up In a truck and got out. Something made Karen take the time to chat with him.

She told him the story of her kiln and invited him to take a look at her studio. He told her he was a glass artist and little bells started ringing in her head.

She asked him if he would like the glass kiln on the curb and he was thrilled.

This is how encouragement works. It is as good for the giver as it is for the receiver. What is required is the courage to know we are never alone, there is someone willing to help if we have the courage to only ask.